We DIY-ed Dusting Sprays: Here’s How It Went

Scrolling through social media, you can always find the occasional ‘cleaning hack’ that looks promising. But do we ever stop and actually test them out?

A popular hack making rounds is DIY dusting sprays, also known as dust repellent sprays. Ordinary homeowners make homemade recipes that they claim to be effective in wiping away dust and preventing it from collecting.

Read on to learn how to make your own DIY Dusting Spray, with instructions directly from yours truly!

Where & How Does Dust Accumulate

Before we make our DIY Dusting Spray, we have to understand a little more about dust itself.

The duration of dust settling depends on your environment. In a city environment like Singapore, it can take up to 24 hours for it to start accumulating in your home. 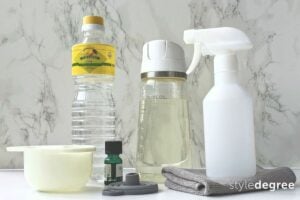 Also check out on StyleMag: 7 Non-Toxic & Natural Cleaning Sprays You Can Easily Make At Home

This recipe yields about 350 ml of dusting spray and lasts for at least 3 months on a biweekly use. 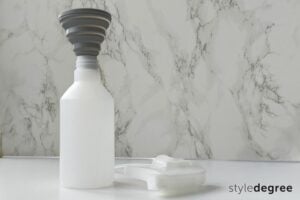 We first placed the funnel into the spray bottle, making sure it was stable for when we put in the ingredients.

Then we poured the water, vinegar, olive oil, and tea tree oil into the bottle. We gave the funnel a good shake before we started spraying so that the oil and water wouldn’t separate. 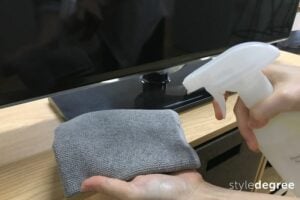 We dampened our microfibre cloth and tried out our Dusting Spray on a dusty TV stand. We gave the stand a few sprits and wiped it down in a diagonal motion. 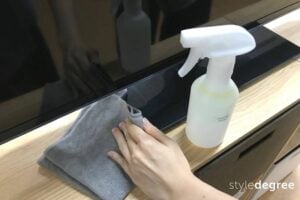 We immediately noticed how the place we wiped at was significantly cleaner than the parts we didn’t touch. Aside from the stray hairs from the cloth, most of the dust had been removed.

We also tried wiping down the corner of a wood shelf, which was particularly dusty (you could see where the dust ended under the flower vases). The end results were similar to the TV stand: mostly clean and pleasant aroma.

Note: Before everyday use, test out an inconspicuous patch of a surface as you might know how it will react. 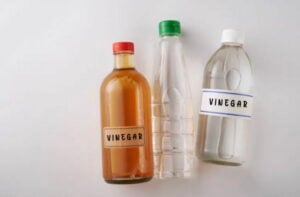 A common ingredient in DIY dusting sprays is white vinegar. It is discouraged to use the spray daily as white vinegar is particularly drying, and can harm the wood.

While tap water is fine to use, distilled water is recommended as an alternative as there is potential for bacteria to grow if the dusting spray is not used often. 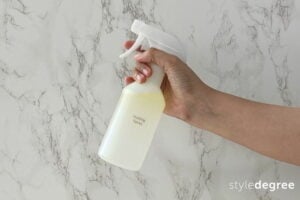 While using the spray, we noticed how the smell of vinegar was masked by the tree oil that we used. The Dusting Spray left a nice earthy-nature scent.

We did notice before every spray we had to shake the bottle, which can be quite repetitive and a small annoyance for some. Since our bottle was clear, it was pretty easy to tell when the oil had separated from the water. The liquid shouldn’t separate too much as it will affect the overall effectiveness of the spray.

After wiping, both surfaces felt cool to the touch after cleaning. It wasn’t dripping wet nor was it extremely dry, but rather somewhere in the middle. 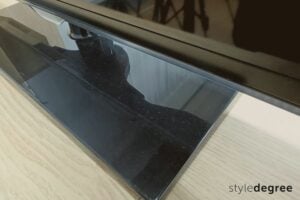 After leaving the surfaces for two weeks, we went back and checked out how well they prevented dust from accumulating. For the TV stand, we realised that there were some small specks of dust here and there. However, we did see how there wasn’t a thick coat of dust like before. 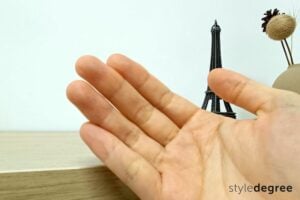 When we checked out the shelves, we were able to find small traces of dust similar to the stand. After running a finger over, we could see there was a very faint dust mark (note the middle and ring finger!).

For both the TV stand and shelf, there was no oily texture left on the surfaces. In fact, it felt just as dry as it did after wiping them down for the first time. There also wasn’t any lingering smell of vinegar or essential oil.

Overall, we’d rate this DIY Dust Repellent Spray an 8/10. Though a small amount of dust had accumulated on both surfaces, we feel that it did a good job preventing large coats of dust from gathering. Plus, there was no unpleasant residual smell nor texture.

Tell us about your experiences with this DIY Dust Repellent Spray down below! Did it work well for your surfaces? What personal rating would you give this spray?

Tailored For You: Design a Desk Organizer >

Create an Account
Sidebar
Join Our Waiting List! Simply enter a valid email address below and be notified when fresh new arrivals are available!